Designed by PRP Architects, Parklands Manor in Chertsey is 95-bed care home which sits on the site of a former 1980’s office complex. The award-winning property has been constructed using Nudura’s Insulated Concrete Forms (ICF) and boasts an impressive 2,508 m2 of internal floor space and 3,716m2 of walls. It is one of the largest ICF projects undertaken in the UK to date.

Despite its size the ICF installation only took 50 days completed by just four workmen who were using ICF for the first time.

In keeping with the area, the design of the facility is reminiscent of a late 19th Century country house with lots of arts and crafts style architectural detailing. A palette of materials has been used with facing brickwork and reconstituted stone mullions and areas of painted render and tile hangings. Communal facilities are grouped towards the centre of the cranked floor layout, “double banked” with suited accommodation in clusters on either side of a central corridor.

The whole building is set within extensively landscaped grounds and a large feature pond. Communal spaces are designed to overlook both the main entrance to the north and gardens and the pond to the south providing a secure area and amenity space for residents.

The site sits within the Thames Basin Heather Special Protection Area [TBHSPA] in the Green Belt and contained several mature trees protected by Tree Preservation Orders (TPO). Careful environmental protection measures were required to ensure no damage was caused during construction activities and minimise disruptions to the environment.

Specified by the architect and the client Nudura’s ICF was chosen for its speed and simplicity of build and the lightweight nature of the forms which meant that very little heavy plant equipment was required.

Supplied by Nudura Distributor ICF Supplies Ltd, the ICF system is based on pairs of closed-cell EPS panels which are connected using cross ties. Nudura’s blocks are some of the largest forms on the market and can be quickly and easily erected to a full floor height.

Reinforcement is placed within the forms as you go and once erected to full floor height, they are propped prior to filling the core with concrete. The EPS formwork remains in place after the concrete has cured, providing thermal insulation on both sides of the building envelope. Due to the peculiarities of the site the concrete was poured into the wall cavity via a concrete ‘hopper’ hoisted by the onsite tower crane. This enabled regular pours and saved on the hire charges of a specialist concrete ‘boom’ pump.

The sloping site allowed for the inclusion of a basement build, which houses plant and ancillary staff accommodation. The fact that Nudura can be used both below and above ground was an important factor for this project. Basement projects require specialist input so to ensure correct procedure is followed the concrete core for the basement was calculated at 250mm. Nudura’s 150mm form was selected for the above ground external envelope.

This challenging building rises to 3½ storeys and in total has more than 300 openings including offset angles, windows and doors. Conscious of the vital role sub-contractors play within their business, Metnor included the whole team in training around the ICF product and installation. The Nudura installation was subcontracted to Harrow-based 4D Structures who are RC specialists but first-time ICF users. Not only did this serve to share best practice but ensured the smooth delivery of the project from start to finish.

Despite the complexity of the project the simplicity of the build method and constant communication between all parties involved meant that the project exceeded the expectations of the client. Parklands opened three months ahead of schedule, just under budget and without compromising on quality. Considerable savings were achieved on prelims, plant hire, labour costs, etc and subsequently the residents were able to move in to this beautiful development much earlier than envisaged.

Steve Burgess, Sales Director for ICF Supplies Ltd, said: “Metnor Construction were open minded to Nudura’s method of construction and with the onsite help we provided they were very happy with the build speed and efficiencies of the product.

“Although the installers had never built with ICF before they easily adapted to the construction method and became so quick the scaffolders could not keep up with the speed of the wall!” 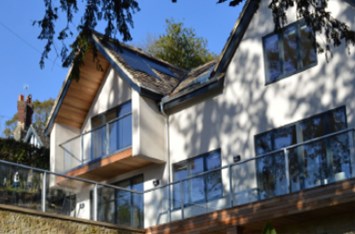